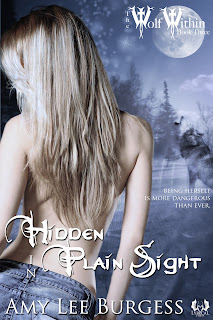 Okay, people, guess what?  Monday, July 9th, is right around the corner and with it comes the release of the third novel in The Wolf Within series - Hidden in Plain Sight.


Where is Bethany Dillon? The seventeen-year-old girl is missing from the Maplefair pack and Constance Newcastle--Stanzie--and Liam Murphy must find her. Fast. A serial killer still has not been caught. Bethany could have run away, or killed herself. But no one in her pack seems to know the truth. Or, they’re just not telling.

Constance’s knack for uncovering secrets leads her into peril, and to save Bethany, she must break every rule. She risks losing everything, including Liam...and her life

Whoa!  Melodramatic, huh?  But it is true.  Stanzie does risk everything.  You'll have to read it to find out how.  And maybe this is your lucky day!  Does anybody want a free copy?  Here's how you could get one.

Read the excerpt from the novel below and then answer this question in the comments section. Names of everyone with the right answer will go into a hat and I'll make a random drawing. I'll announce the winner Monday.

Here is the question:  What nationality is Liam Murphy? (Could the question BE more easy?)

By the time Murphy caught up to me I was soaked. My dress was plastered to my thighs. My hair hung in damp strings around my cheeks. I walked steadily around a small apple orchard. Apple branches, thick and stunted, twisted up toward the rain as if to beg for release. A drift of white blossoms littered the ground. I was barefoot and the petals were soft against my toes and soles.

Maplefair operated a small year-round produce stand. Mostly the pack grew corn, tomatoes, strawberries and apples. This orchard was one of theirs. In the fall they’d handpick the apples, sell some in bushel bags and bring others to a cider mill to be made into cider.

The last time I’d seen Jossie had been the autumn before Grey and Elena had died. The three of us had
taken a foliage tour to see the eye-popping beauty of the turning leaves. We’d driven through Easton on our way to Burlington and Lake Champlain and had stopped to buy cider and apples. Jossie had been minding the stand that afternoon and, while it had been tense for a moment, Jossie and I had hugged before we’d parted and I’d planned to keep in better touch but somehow never had.

Today the white blossoms gave promise of the apple harvest to come. I doubted I’d taste any of the fruit. By fall I should be in Dublin.

As if the thought of Dublin had summoned him, Murphy fell into step beside me, and waited for me to talk first as he usually did. Ilooked down at my bare feet and saw that the knuckles of his right hand were raw and bloody.

“What happened to your hand?”

He gave me a slanted smile through the raindrops. “Well, I thought I would give that little bastard with the big damn mouth something real to complain about to Allerton if he wanted to talk about how to choose Advisors.”

“Murphy.” I heaved a tired sigh and brushed some wet hair out of my eyes. “You know Allerton doesn’t want you going around punching people. Remember last time.”

“You make it sound like all I do is haul off and hit people.” Murphy snorted. “I’m Irish, woman, I’ve got a temper and that little shite had it coming.”

I didn’t say anything.

“No, for convincing you to shift when you didn’t want to.”

The words hung there between us, wet and heavy with the rain so that I could almost see their shapes, their individual letters. My wolf’s reaction to all the things he’d tried to teach her spelled the same inevitable thing in the end. She was not the same as everyone else’s.

“No, Murphy. I’m not mad. I told you what would happen, you said that was all right, and everything I told you would happen did. You said you’d stay with me and you did. Why would I be mad?”

“Well, you’re something,” he said. “You’re out here wandering in the rain for one thing. You’ve got that look on your face I don’t like for another.”

“The look as if somebody kicked you in the stomach and you don’t want anyone to know how much it hurts.”

I looked down at the mud and apple blossoms again. Something struggled inside of me, something dark and desperate I did not want to acknowledge but was powerless to hold back.

“I really thought until today that she might have a chance at being normal, don’t you see?” I tried to explain myself to him, but I knew by the confusion that spread across his face he didn’t understand.

“My wolf, Murphy, is never going to catch up. I failed to take into consideration the fact that while I might be evolving my wolf, everybody else was too and most of them have years and years on me. Why, I’ll bet that grandmothers and grandfathers can barely tell the difference between themselves as human and themselves as wolves. Maybe that’s why they don’t shift all that often. What’s the point except you can run on four legs and old wolves aren’t that fast. Isn’t that true, Murphy? That your wolf is still evolving? That every year you get one step closer to yourself in wolf form?”

A pulse beat thickly in his throat. “Maybe. But that doesn’t mean...”

I held up a hand and he stopped talking. Soft spring rain dripped through the cracks of my fingers and down my bare arm.

“My wolf wants the names for everything. Everything, Murphy, and she won’t move on until she has the names. Only she’s never going to get them all. There are so many goddamn things in the world with names that she will never know, not if she shifted twenty times a day for the next hundred years. All she’s ever going to do is discover things she doesn’t know the names for and then sit there until she finds them. Not only is she never going to catch up, she’ll never be halfway normal. She never has been.”

“Stanzie,” said Murphy, helpless against my onslaught of logical insight. “Don’t do this to yourself, please.”

“People have been calling my wolf a joke for years. I didn’t even hear it half the time. I tried not to let it matter because I thought I was the lucky one. I thought they missed it all--the beauty and the fun and the sheer weightlessness of not having to think about anything, of not having to be anything but a creature alive and full of joy. She was blissfully asleep and I let her be that way. But then I woke her up and now she’s a broken, defective thing and there’s no joy in shifting anymore. She doesn’t feel alive and connected anymore. She feels trapped and disconnected, shut out from all the names of things. She thinks if she finds the names, she’ll be safe again and full of joy. But she won’t ever find all the names.”

Murphy bowed his head and the rain ran in rivulets down his cheeks in a parody of tears.

“I did this to you. Me and my vain confidence that I could show you something better, something
different.”

“You didn’t do it,” I said gently. “I did it. I agreed to it. I knew what I was doing and knew it would change everything. I thought it was time to grow up.”

“You did it to please me. You wanted to please me. I know you did. You’re always wanting to please me as if just the fact you’re alive and with me isn’t enough. You’re always trying so hard, Stanzie. And your wolf’s the same damn way. It’s not good enough to learn words as they come, one or two at a time, no, yours has got to know them all before she can go to the next step. As if anyone could know everything. They can’t. They don’t. Your wolf’s not defective, Stanzie, she’s stubborn. She’s become self aware, don’t you see that? She’ll come around, you watch. Just let her get her feet underneath her. If she wants more words, let her find them. We have time. It’s not a race.”

“I feel so out of my league with you.” I stumbled over a tree root and he caught my arm and saved me from a fall. I turned toward him, shivered in the rain and took hold of both his arms. “I am trying to run with you and with Councilor Manning and Councilor Allerton, and I can’t keep up. What the hell am I doing? I’m trying to be somebody I’m not. Christ, I couldn’t even keep my place in a pack of misfits with the lowest status in all of New England. And half the reason the damn pack was so low in status was because of me--because of my wolf. Now you’ve got me running with Mac Tire and the Councils, and I can’t do it! I can’t do it!”

I shook him as if that would make him see my point but he just stared at me. “Your wolf is evolving. I’m proud of you for what your wolf did today, believe it or not.”

“Why? Because your wolf sat in the yard and tried to find the word?"

He looked over my shoulder and stiffened a little, my first indication that someone approached. I heard squelching footsteps in the mud and turned to see Vaughn huddled up against the rain in his leather jacket, hands shoved into pockets.

“Christ, what filthy weather,” he remarked to me and Murphy as he drew close.

I wanted to ask him why he was out in it then, but Murphy spoke first. “I’m glad you’re here, mate. I’m at my wits’ end with this woman. Can you say something to make her see reason?”

Vaughn looked straight at me and said, “Gary Planchett is a giant asshole.”

I laughed, I couldn’t help myself. Murphy and Vaughn did too.

At some point my laughter began to ease the terrible pressure that had built up inside my chest ever since I’d shifted back.

“Oh, by the way, that little rat bastard’s got a black eye to go with his fat lip.” Vaughn took one hand out of his pocket and displayed his bruised knuckles.

Murphy grinned and wrapped an arm around my shoulders. We started back to the farmhouse, the rain cold on our faces.

Now leave me a comment with the answer to the question above and see what happens!
Posted by Amy Lee Burgess at 8:14 AM