Do You Really Want To Wear Those Shoes?

Okay, so finally after months of concentrating on my novels, I've got a Friday Flash.  I hope you like it

“You aren’t seriously going to wear those things, are you?” Mimi’s brows contracted with distaste and doubt. The skin between her eyes wrinkled ever so slightly.  Sometimes I suspected she’d indulged in secret rounds of Botox because she never seemed to age.  We’d been best friends since freshman year in college and we were now way closer to forty than thirty, but she could still pass for a college co-ed.  At least to my jealous eyes.

She’d seemed to put the aging process in a holding pattern around the time she took that night job and began sleeping during the day.

I couldn’t fathom the reason for a single woman who had just turned thirty to voluntarily cut short her available night life hours.  I guess her biological clock did not tick as loudly as mine.

I’d turned thirty and panicked and ended up marrying the first available jerk that I met. I wanted a baby in the worst way.  It turned out that I hadn’t counted on how much I didn’t want a husband.  Or at least the one I’d married.

Three years of hell and he’d walked out on me.  No baby either so it was a total waste of valuable time.  Now at thirty-six, I was panicking again.

This costume party tonight would be bound to attract lots of single guys or even unhappily married ones that I might attract.

I wasn’t as co-ed gorgeous as Mimi with her raven black hair and mysterious blue eyes, but I wasn’t chopped liver either.  So my red hair tended to corkscrew curl unless tamed with a flat iron and maybe I could stand to lose a few inches around my hips, but what the hell, I wanted to be a mom not a super model.

“I wish you’d wear something else,” said Mimi.  She was going to the party as Cleopatra and the gold painted vulture and cobra diadem she wore made her look twice as mysterious as ever.  Her short white toga and gold belt didn’t hurt either.

Mimi could pull off costumes like Egyptian temptress queens, but I knew better than to try.  I probably could have managed the first Queen Elizabeth, but those high ruffed collars did nothing to show off my greatest asset – my tits. Plus going as the Virgin Queen would really be delivering the wrong message in my case.

So I’d gone prosaic and predictable with the vampire costume.  I loved my slinky black spandex dress that did marvelous things for my figure, low cut enough that I’d have to be careful not to get too drunk and break out my spastic dance moves for fear of a costume malfunction along the lines of Janet Jackson at the Super Bowl.

So I’d scrounged around in her massive walk-in closet at her apartment.  We wore the same size shoes if not dresses, and I’d been confident I’d find something sexy.  Mimi might work the night shift, but when she did get out, she knew how do it right.

After ten minutes of trying on and taking off, I’d found the perfect pair.  They’d been hidden in a box beneath an avalanche of winter sweaters.  Mimi had tried to steer me away from that end of her closet, but I’d ignored her. I‘d seen messy closets before.  Hell, I had two of them in my own apartment two floors down.

The shoes were wild. Not Mimi’s style at all. They were gaudy, overstated and ridiculous. Six inch platform sandals, silver metallic spikes alternated with red plastic dots. The platform part had been hollowed to resemble a life-like mouth complete with curled pink tongue and teeth, including long white fangs.  Vampire shoes.  So perfect for my costume it wasn’t even funny.

“How come you didn’t suggest these first, Mimi?” She was unbelievable.  You’d think she didn’t want me to know she had them, for Christ’s sake.  “You know they’re perfect for my costume.”

“I wish you wouldn’t wear them, Nicole.” Mimi tried to give me her patented “Listen to me and do what I say” stare but I knew how to avoid those x-ray eyes of hers.  I slid my gaze away from her face and turned my head as I marched past her out of the closet, the vamp shoes dangling from my fingers.

They were surprisingly light for shoes with spikes and fangs. Nearly weightless.  Maybe they were made of some sort of plastic. The leather covering them was soft and supple.

I sat on the edge of Mimi’s bed.  An irresistible urge to touch one of the fangs on the left shoe overcame me.  I reached out a curious fingertip – were they plastic too?  Before I could connect, Mimi knocked the shoe out of my hand.  She had a pair of sexy red pumps in her free hand and waved them beneath my nose.

“I think these would be better. I really do.” Her voice sounded almost frantic and I frowned at her.  What the hell was her problem?  She’d never been territorial before.

“I know they’re a little wild and certainly unique. What’s the issue?  You think that if I wear them tonight you’ll never be able to?  I’ll tell everyone they’re yours.”

“No!” Her luscious red lips curled back in an almost snarl and I drew back in shock.

“You are being weird tonight,” I stated huffily.

“No.” I didn’t know why she had to be such a pain in the ass.  I was going as a vampire and they were the perfect shoes so what the hell was her damn problem?  I was getting seriously pissed off. “Look, don’t we have a standing pact to share everything?”

“It’s not a question of sharing, Nicole. Please.” Mimi tried to push the red shoes into my hands and I took them and threw them across the damn room.  She was being childish and completely unfair.

I picked up the left vamp shoe and, once again, the glittering fang beckoned me to touch it.  I just had to know.  Was it plastic or not?

“I’m warning you,” said Mimi.  “For the last time.  Nicole, you do not want to wear those shoes.”

“Bullshit,” I said and touched the fang.  “Ow!  Sonofabitch!”  Something red appeared at the tip of my finger. Blood.  That fang was sharp.

I looked at Mimi and for the first time ever wondered what it would be like to kiss a woman.

“Balls,” I muttered and put on the vamp shoes.

“Now do you understand?” Mimi’s voice sounded like silvery bells. The whole world was bright and surreal.  The night pulsed in my blood like a lover.

“Guess I’ll need to find a night shift job now,” I said as I rose to my feet.  Strength, vitality and lust flowed in and out of me.  I looked in the mirror and damned if I couldn’t have passed for a college co-ed.  Those extra inches around my hips had melted away too, just like the years.

“I never really wanted to be a mom anyway come to think of it,” I said.

Mimi laughed and arm in arm we ventured out into the night. Screw costume parties, we were the real thing now. 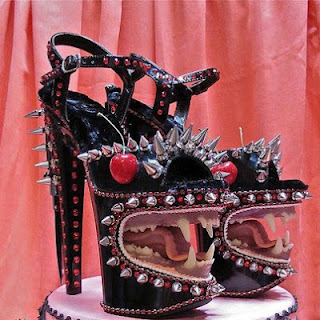