Cover Reveal and Countdown to Release of The Circle: Blood Gift

On December 10th, something personally momentous is going to happen.  My vampire novel, The Circle: Blood Gift will be released by Loose Id.  Some of you might know I began writing the first rendition of this novel back in 2006, post-Katrina.  Writing was the major way I dealt with losing my home in New Orleans and the abrupt upheaval of my life.

The first three or four years after Katrina were hard ones for me. I had to give up my home in a city I adored and try to make myself like Houston (something I still struggle with eight years later). I lost all four of my beloved cats to old age and various illnesses. My marriage broke up which left me without a best friend for a while, and it seemed like the whole world conspired against me.

Writing saved my sanity and characters like Anabel, Andre, Parker, Oliver, Gareth, Neal, Harry and Denis  helped me make it day to day.

I got through my crisis years and moved on. I published my debut novel, Beneath the Skin and began to write a series around the two main characters, Stanzie and Murphy.

But I never forgot my vampires.

About a year ago I dug them up from dusty old files and gave them a new spin. Some of the original cast didn't make the cut, and one major character, Anabel, became Claire, someone completely new, yet with some of Anabel's core characteristics.

I came up with what I thought was a pretty damn good novel. I sent it out for submission.  The first publisher sent me a generic rejection letter. The second sent me a personalized one telling me I *just missed*. The third publisher sent me a revise and resubmit letter.  Could I make these changes? If  I could, they would love to see my novel again.

Three months and buckets of tears later*, I resubmitted and the day I received the acceptance letter, I nearly burst with joy.

On December 10th, this novel, now titled The Circle: Blood Gift (does that give you  a hint this means the book is the first in a series?  Well, maybe it should!) will be released. I hope you will come with upon my journey as the book tours with Buy The Book Tours.  If you are a blogger and want to host me on this tour, you can sign up here.

For now I will leave you to sink your fangs..err.. feast your eyes upon the cover.  Isn't it gorgeous?  Mina Carter at Loose Id did a fabulous job, didn't she?   See you on December 10th! 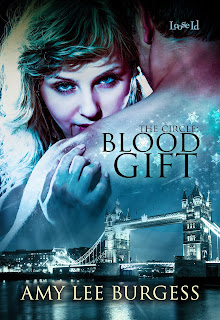 * This book is so personal to me, revising it dredged up a lot of personal issues and angst. But it was all worth it. I think this final version is better than any of the versions that came before it. So get ready for an adventure!
Posted by Amy Lee Burgess at 7:50 AM